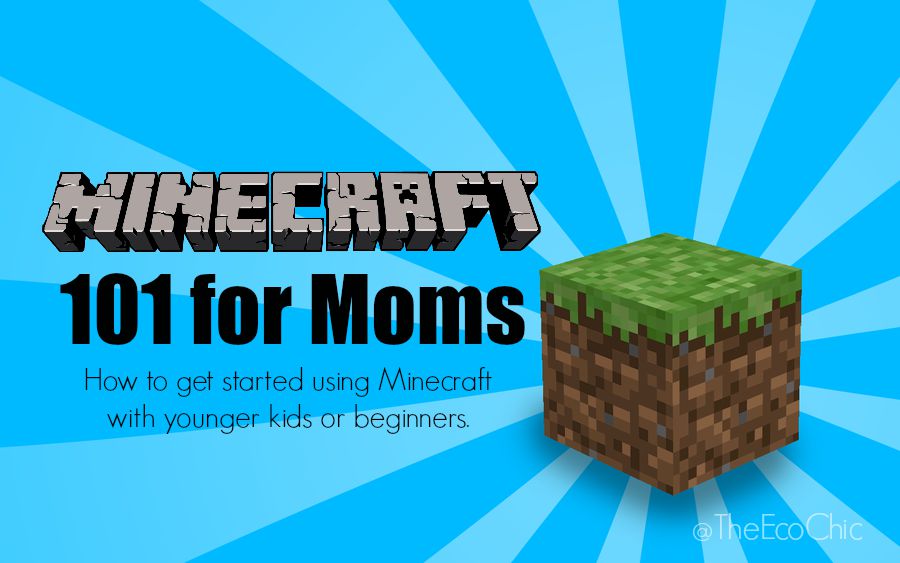 This summer my six year started playing Minecraft.  My oldest has been playing it for a while, but he’s never needed “help” with it like she does.  He’s pretty intuitive and if he has questions he goes to YouTube to find his answers.  We have a collection of Minecraft books that he has to help him (most are pretty advanced resources), but again, that’s not something she’s ready for yet.  At six, she just wants to know how to play!  My son did attempt to teach me how to play once, but I was left being buried in lava and attacked by zombies (he sabotaged me).  I decided to do a little homework, we’ll see who sabotages who now!

I was gifted an e-course on Udemy, Minecraft For Dummies video and eBook bundle, and it was incredibly simple to follow. The first few courses walk you through some of the basics of playing Minecraft on your computer, but most of the tutorials apply for the app and game system versions also.

Which version should I get? What’s the difference between them?

You can play Minecraft using a app on your phone or tablet, on your computer, or on your gaming system.  We have all three and my kids end up playing all of them.

Minecraft Pocket Edition (apps): Both Apple and Google apps are $6.99 (buy Minecraft now on Amazon – affiliate link) and you can login on multiple devices with the same username.  There are in-app purchases so if you don’t want extra charges to appear make sure you disable in-app purchases on their devices. You don’t need to be connected to the internet to play on the app, but if you are on wifi your kids could play with one another on different devices (when on the same wifi). The pocket edition will allow them to play in both creative and survival modes (I’ll explain this in a minute).

Minecraft PC & Mac: You can download Minecraft for your desktop or laptop computers, just be prepared for your kids to steal your devices!! The PC & Mac versions cost $26.95, but there are no additional charges after that. Once you’ve paid for the PC or Mac version, you can download it on multiple machines, but you can only login to one at a time. As long as they are logging in to the same account (username) they can login from anywhere. This is helpful if they are visiting friends or relatives where they will want to play. Once you’ve downloaded Minecraft they do not need to be online to play; however if they want to play on a server (advanced and older kids) they will need to be online. They can plan in both creative and survival modes on a computer. If your child wants to learn how to code and enjoy the more advanced features of Minecraft the computer version will become their favorite. There are several things they can only do on the computer version but the beginner probably won’t notice those yet.

XBox 360  and PlayStation 3: If you have a gaming system, you can get Minecraft for $19.99 (affiliate link for Amazon). You can play multiplayer (split screen) with 2 controllers or you can play using XBox Live and I think PlayStation has something similar. They can play both creative or survival modes and do almost everything they can do on the computer. While the beginner won’t really care, you can’t play on a server from your gaming system.

When you’ve selected “Single Player” the next screen will show you 5 empty worlds. Select one of the worlds and “Create New World.”  This will give you the option to name your world (I just made Mom’s World.) and pick your game mode.  For beginners you’ll want to start in creative mode.   Now the game will load and begin building your terrain.  It may take a minute for your world to populate. Each new world may load in a different area and with different surroundings, but you can save your world so you can continue to play in the same area.

In Survival Mode your character has to survive and can die of starvation or from zombies. It can be a little frustrating for the younger players or for beginners to learn how to play and survive at the same time.

In Creative Mode you can do almost everything that you can in survival, except you can’t get killed by zombies or by other players. In creative mode they can build things, craft things, and travel around their world. It’s a great place to start if they’ve never played before.

There’s also a Hardcore Mode, but we won’t go into that here!

I’m going to use the computer edition for my examples today, but the gameplay and controls are very similar on the app and gaming system. For the gaming system you use your control/joystick to move around and on the app you use arrows and touchscreen controls.

In the computer version the characters move around by the keyboard.  If you’re over 40, you may remember old school computer games where you moved using W, A, S, D, and Space. Minecraft is very similar. You can change the actual keys in the control setting, but the default controls are:

You’ll need to use the mouse to change your views, place blocks, and break blocks. Everything else is done with your keyboard controls.

Now, go forth and create! Find a tree and punch it! Start crafting!

From here what they do with Minecraft is up to them. Let them get use to the controls, walk around the world, and experiment with building things. To build things, you’ll need to go to your inventory (I on the keyboard) to pick out what supplies you want to use (wood, stone, ores, tools, etc). Honestly, I just let my kids play once we get to this point.  It’s fun to see what they build. They’ve built houses, tunnels, caves, fences, gardens, and so much more! They’ve tamed animals, corralled animals, and killed animals for food.

Here are a few more short videos that will help you with some of the basic gameplay:

Don’t be afraid to search on YouTube how to do something. There are a lot of great videos by kids that explain exactly how to make things and play the game. Once they get started playing, they will learn almost everything on their own. Before you know they will be playing for hours and you’ll have to set time limits on how long they play. When they get really advanced, you can invest in some Minecraft for Dummies books to teach them how to create their own servers, how to code their own worlds, how to use redstone. Trust me, the vocabulary will be a little crazy and you’ll still have no idea what they are doing! At least you’ll know how to move around and run away from them when they try to sabotage you!

Does your kid already play Minecraft? Do you enjoy playing with them?

Disclosure: I want to thank my 12 yr old for his input and help writing this tutorial. I also wanted to thank Udemy and the Wiley publishing for their great Minecraft for Dummies resources they’ve provided us.

Have you enrolled in Florida Prepaid yet?

How to Make a Snapchat Geofilter for Your Next Party

Tips for Simplifying Your Holiday