Over the Christmas holiday I shared a post about my family spending a day at SeaWorld park in Orlando.  At the time I was aware of the documentary Blackfish (affiliate link) that has raised some concern over the care and well being of Orca’s at SeaWorld.  I hadn’t seen the movie yet and was very reluctant to watch it; in fear of what I might see.

Over the past several weeks I’ve seen and heard more and more about performers and sponsors pulling out of commitments with SeaWorld because of the backlash about the movie and concern from their fans and customers. 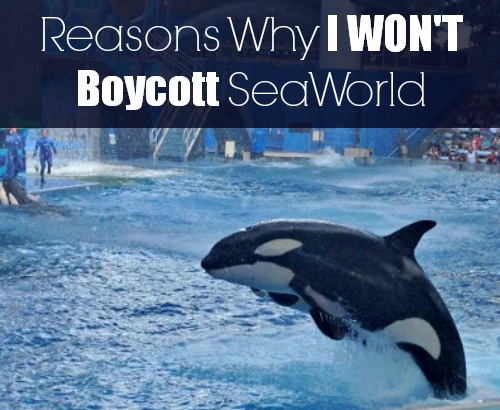 I do however believe that it may be time for some changes at their theme parks and I think you’ll see those changes over the next few years.  It’s not as though they can just set all the animals free from captivity tomorrow and move on to bigger and better things.  That isn’t the right move for the animals that are currently in their care, nor is it right for the employees and their families.  Any changes that may (or may not) come from this controversial documentary will have to come with time and support from their customers.

Should animals be kept in captivity?  I don’t think I’m the right person to answer that question.  I think that we learn a lot from these animals when they are in our care.  A lot of what they learn from the animals in their care can be used to better understand animals in nature.  Yes, some of this research can happen in nature but to fully understand all the intimate details of these animals you have to spend years studying them.  It’s not something that is easily done in the wild.  80% of the animals that are currently in their care were born at SeaWorld and not from the wild.  Those animals, like Tilikum, that were captured in the wild have been in captivity for 30+ years.  They haven’t captured animals from the wild since the very early days (to my understanding) and have no plans on capturing animals in the future.

I agree with the changes SeaWorld has been forced to make with regards to having trainers in the water with Orca’s.  Trainer safety should be and is one of their top priorities.  Any animal, even our own pets, has the ability to hurt us and our children under the right circumstances.  When you’re talking about an animal the size of a Killer Whale, you just can’t predict how they will behave on a bad day.

As a child I dreamed of being a dolphin trainer.  I had that dream since as early as I can remember and if I could do college all over again, I might still consider it (but that’s not gonna happen in this lifetime).  I’ve told my husband many times that if I ever died by interacting with a dolphin or whale, then I died doing something I loved!  Now…that’s not going to happen since I currently sell cloth diapers unless I magically get recruited and change careers (again).  I’m just trying to think about how I would feel if I were a trainer and something were to happen to me while working with the animals I love…now back to my reasons for not boycotting SeaWorld.

With regards to concerns that these animals are living in tanks that aren’t big enough for them I’m not really sure what the answer should be to solve this.  I wholeheartedly understand the migratory nature of these creatures and how they shouldn’t live in “fish bowls” but the same could be said for any living animal that is cared for in our zoos and aquariums.  Should bears, monkeys, sharks, lions, giraffes, and elephants have larger enclosures in zoos and aquariums?  You can see that answer at many of our national zoos as they continue to increase their living areas.  The harder problem to solve is how to find the money for those advancements.  What type of impact financially do you think these parks will face after being boycotted?  How is that going to HELP those animals currently in their care?  They CANNOT just let these animals go back into the wild without significant amounts of rehabilitation and preparation; and even then I truly don’t think those animals who were born at SeaWorld would EVER be able to adapt in the wild.

Animals as entertainment?  Yes, I understand that SeaWorld is in the theme park and entertainment business and that it is a business.  I believe there is a balance with how the animals are used for “entertainment” purposes.  I believe that we do learn from these interactions but I do respect that we don’t need them to “entertain” us to appreciate them.  I could spend hours watching dolphins interact with one another and be just as happy as I am when watching them perform.  There is more to a SeaWorld performance than just animals entertaining us.  The human performers are just as entertaining (if not more so) with their acrobatics and diving abilities.  The performances always include a message about how and why we should respect our natural environments and the animals that live in them.

There are many great things that SeaWorld does that are good.  They are one of the leaders in wildlife rescue and have saved over 23,000 animals who have been hurt, injured, or sick in the wild.  Their primary goal when they rescue these wild animals is to be able to release them back into their environment.  Living in Florida, I’m thankful for their rescue efforts to save injured sea turtles, dolphins and whales.  I’m thankful that they help conserve our natural resources by protecting and saving these precious creatures.  They wouldn’t be able to continue these efforts if everyone decided to boycott them and there aren’t enough non-profit volunteers out there to support massive rescue efforts like those in the 2010 BP oil spill; which saved 100 engendered sea turtles.

Education, this is a big one for me!  If it weren’t for parks like SeaWorld, many children would never be able to see these animals up close.  Their parks educate children and adults on how our decisions impact the lives of these animals.  They educate us on how leaving litter on the beaches can impact the health and well being of dolphins in the wild.  I think one of the reasons I have such an affinity to these animals is because my parents took us to SeaWorld almost every year as children.  Has seeing any animal made you feel more compassion and love for them?

I don’t know what to expect from SeaWorld in the future or how this media backlash will effect them over time.  I don’t know what changes we will see; but I’m confident that changes will be made.  Of course, as with any documentary, there are two sides to every story and only one side is told in the movie.  I think there are some great perspectives out there that aren’t shared as often.

To read more on SeaWorld and their response to Blackfish:

Response from SeaWorld about the care of their animals can be found on their website.  Be sure to take some time to read their story and about the efforts that they make each and every day, 365 days a year, to care for these animals both in captivity and in the wild!

As for me…I will NOT be boycotting SeaWorld and I will continue to take my children there so they can experience the same love and compassion that I have for these animals.  I have so much respect for the hard work of the SeaWorld family of employees for all of the work they do to protect and care for these animals.  Do I recommend that you watch Blackfish? (affiliate link) That’s a decision you’ll have to make, if you haven’t already.  Be prepared with a box of tissues and have an open mind while watching it.

Please feel free to leave comments below with support for either side of this topic.  I will leave all comments that are left in a respectful manner and do not contain foul language or attacks.  Thank you for your passion and for caring enough about these wonderful animals to debate the topic respectfully.  In the end, I believe we all care for their well being and don’t wish for anything bad to happen to them in captivity or in nature.

The Truth About Spray Sunscreens