Many of us have switched to a more eco-friendly lifestyle because of our children.  We have switched to cloth diapers, we breastfeed, we make our own organic baby food, there are lots of changes we have each made in our lives – primarily for our children!  The biggest trend in the baby industry that I’ve noticed is getting away from BPA laden products (bottles – toys – and more) because of the possibility of leaching estrogen disrupting chemicals into our babies!  My son is one of thousands of children who are becoming a statistic – he was born with hypospadias.

Hypospadias is a birth defect that effects the urethra – the urinary opening is abnormally placed.  While my son had a mild case others might not be so fortunate.  Instead of the traditional circumcision (which I know some of you are very adamant against) my son had reconstructive surgery at 9 months to correct the hypospadias (and give him a perfect circumcised appearance).  This surgery was optional and the specialists told us that he would have grown up just fine without the surgery – but both my husband and I agreed that life for teenage boys is hard enough without adding any extra complications!  My son has no idea (7 years later) that he is any different from other boys.

What causes hypospadias?  Recent studies are linking the increase in hypospadias to the presence of BPA during pregnancy.   Cases of hypospadias in 1970 occured in one out of 500 male births; while in the 1990’s that rate had decreased to one in every 250 male births.  Is my son a statistic?  Very possibly so!

Hypospadias is only one of the many birth defects and health risks that our children face because of our modern conveniences.  Tune into a two night special on CNN with Dr. Sanjay Gupta to learn more about our Toxic America!  Here is what is being said about Toxic America: 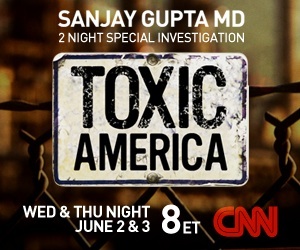 Toxic America is hosted by the always wonderful Dr. Sanjay Gupta and will run over two nights (June 2 and 3) with the first night, dubbed Toxic Towns.  It will focus on CNN’s year-long investigation into the residents of Mossville, Louisiana, who for decades have claimed that toxic chemicals in the air have been making them sick.  And for just as long, they say government agencies have done next to nothing to protect them. This once rural, African-American community in southwest Louisiana is now surrounded by 14 chemical plants, spewing tons of cancer-causing chemicals and other toxic chemicals into the air. Chemicals have also seeped under Mossville and into the nearby bayous. Since CNN began its yearlong investigation, the U.S. Environmental Protection Agency has started testing to see whether Mossville qualifies as a Superfund site, meaning federal funds for cleanup and, possibly, relocation. Also, the Organization of American States has agreed to hear a human rights case brought by Mossville against the U.S. government for failing to protect the community against toxic chemicals.

The second night, Toxic Childhood, delves into effects of unseen chemicals on ALL of us, particularly how much of these toxins are being passed onto the babies of pregnant women.  Here’s a few of the show’s findings – crazy stuff:

-Exposure to car and truck exhaust in the womb has been shown to result in lower IQ at age five.
-Babies enter the world with more than 200 dangerous chemicals in their blood (!), including flame retardants, dioxins, substances in non-stick coatings like Teflon and hormone-like compounds found in plastic.
-Out of the 80,000 chemicals in use in the United States, the EPA has only tested about 200 and only banned five.

You can attend a live video broadcast for Dr. Sanjay Gupta next Tuesday at 3pm ET on www.CNN.com/Health.  They will also be answering questions from the audience – to submit a question to be answered by Dr. Gupta click below to submit, or just email cnntoxicamerica@turner.com

If your question is addressed by Sanjay, he’ll give a shout to you and your blog as well.

So what questions do you have for Dr. Gupta?

For Princesses and Super Heros…and even Super Moms!

Teaching Kids to Be Green – the 4 R’s