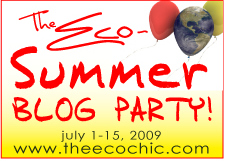 My son has been playing with EcoBuddies.com this week and really enjoys his Buddy, the dragonfly, and playing games like bowling.  He’s only 6 so we haven’t introduced the chat feature with him yet, however EcoBuddies does moderate the site to ensure it is a safe place for kids.

Vancouver-based green virtual word for kids, EcoBuddies.com, just revealed today that it will be starting the initiative ‘Buddies for Baby Animals Day’ where kids will have an opportunity every month to support an endangered animal of their choice.  On the 20th day of each month, EcoBuddies will be donating 10% of the revenue made from new membership purchases to an organization that supports a baby animal of their players’ choosing. Kids will vote which animal they would like to support on EcoBuddies’ official blogs Go Green with EcoBuddies and EcoBuddies Blog. The company hopes that by giving kids the ability to help young animals it will empower them to believe that they can affect positive changes in the environment.
EcoBuddies launched in October 2008 and is one of the leading eco-inspired virtual worlds for kids on the Internet.

Day 9: Lost in a sea of plastic, how about you?