I’ve jumped on the Instant Pot (IP) bandwagon and so should you! Several months ago some friends were raving about this thing called an Instant Pot and I had never heard about it. I later learned that it’s a modern day pressure cooker. The only time I’ve ever seen a pressure cooker in use is at my Grandma’s, she always makes the best pot roast with potatoes and veggies. The meat would just melt in your mouth and the veggies were cooked to perfection.

Disclosure: This post contains affiliate links, all opinions are my own and I truly love these products or I wouldn’t share them with you.

An Instant Pot is a pressure cooker is similar to a slow cooker (or crock pot), but cooks much quicker and under pressure. There were a few features that my friends explained to me that sold me on this thing instantly (pun intended). Here are just a few….

With our work schedules, school schedules, and after school activities (which are just getting started again), dinner is usually tossed together at the last minute. I’m always forgetting to defrost the main dish/meat in the morning which can make dinner prep frustrating. I don’t mind cooking, but I don’t love the prep and planning. The idea of having a cooked meal in under 30 minutes, right out of the freezer, sounded AMAZING!!

So it happened, Amazon Prime Day came (July 12th) and the Instant Pot was on sale for less than $100. I do NOT need to add anything to my already crowded kitchen and pantry, but I was truly intrigued and had to try this. Two days later and I was the proud owner of a shiny silver and black Instant Pot that was delivered to my doorstep.

Have I mentioned that I’m slightly addicted to Amazon Prime? I joined just after Christmas last year when my kids were gifted their Kindle Fires (another awesome investment that I’ll talk about one day). I can’t believe it took me this long to join Prime, but after the 30 day free trial I was hooked and quickly paid my annual membership. I don’t shop much in real stores (aside from grocery stores) so having this ability to shop and ship for free (on most items) has really helped me out this year. Try Amazon Prime 30-Day Free Trial

OK, back to the Instant Pot!!!

It was super intimidating to unbox my IP and read over the directions. The thing isn’t small and there are so many warnings about what NOT to do!! My first piece of advice, don’t be scared because it’s REALLY easy to learn…..once you figure out where the condensation collector goes. 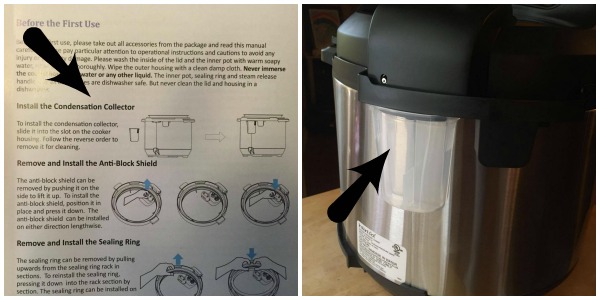 This is where the Condensation Collector goes on your IP

Where do you start? What recipes should you cook first? Here’s a diary of some of the recipes I’ve tried so far and the results of each. 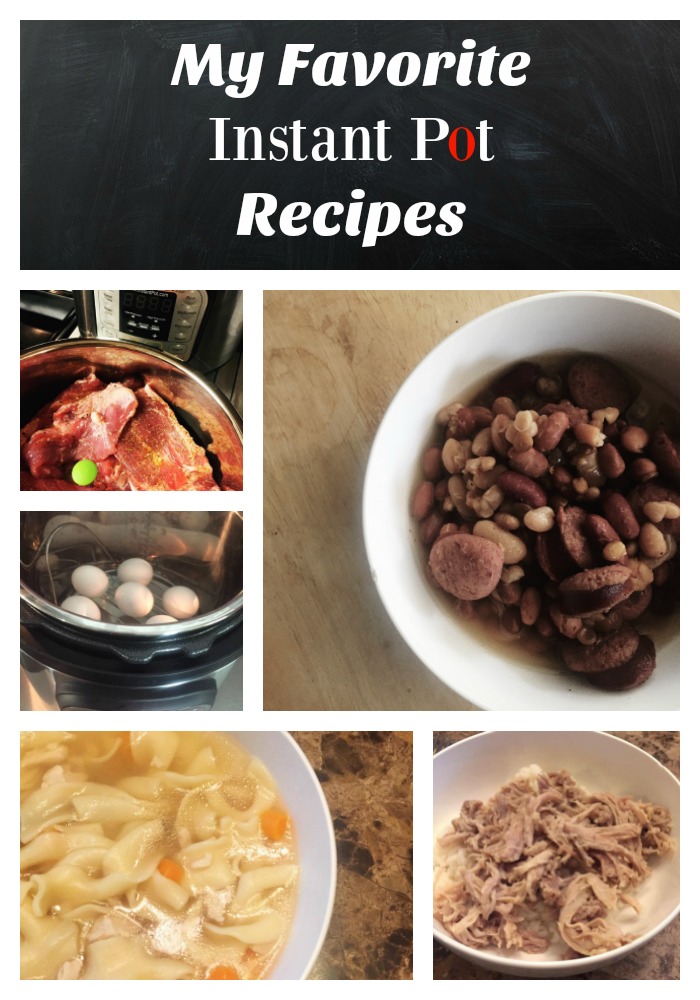 For my first “practice” I made baked potatoes in the IP. The hardest part is figuring out what time to set the IP to and hoping that it’s cooked when you open it. The manual said 12-15 minutes to cook potatoes so I set the time to 15 min, added a cup of water, and placed my potatoes on a rack inside the IP. Closed the lid and walked away….kinda…I really wanted to see what happens so I did watch the pot. It can take about 5-ish minutes for the pressure to build up inside the IP as it heats up before your timer starts. Then when the timer stops you sit and wait for the float valve to drop as the pressure is released, this process can take another 5-10 minutes. You can manually release the pressure if you like, but your food will cook a bit longer if you let it naturally release. Total prep time on this one was about 25 minutes and my potatoes needed another 1-2 min in the microwave because they were a little hard still. I think setting the timer for 20 min (instead of 15) would have been perfect. While they came out good and cooked quicker than in the oven, I still prefer the taste of oven baked potatoes personally.

A few days later I tried some chicken thighs. I was prepared that morning and had already defrosted the chicken, but again you don’t have to. I marinated the thighs in a balsamic, honey, and water mixture for about 15 minutes before placing them in the IP to cook. I set the timer for 20 min and after about 30 minutes (building and releasing pressure) we had chicken that was moist, juicy, and fell off the bone! If you like the crispy chicken skin, you’ll want to broil for a few minutes after it’s cooked. We’ve done chicken thighs a few times with different marinades and they are certainly one of our go-to favs!!

Next up, spare ribs! It was a rainy afternoon (as it usually is in Florida) and we didn’t feel like firing up the grill with the thunder rumbling in the distance. Instead I fired up the IP and we had lip smacking ribs in about 45 minutes. I did invest a few dollars in a steamer basket (less than $7 on Amazon) so that my food is raised above the liquid used for cooking. I followed this recipe (loosely) using the ingredients that we had on hand; Pressure Cooker Ribs. Following the 30-ish minutes in the IP, I coated the ribs in BBQ sauce (just whatever you have in the fridge/pantry) and broiled for 8-10 minutes to give it a nice crispy coating. The ribs fell off the bone and everyone in the family enjoyed them.

Did I mention hard boiled eggs yet? I no longer have to watch the pot of water to boil and pray that my egg shells don’t crack in the pot. After 4 min in the IP, you have perfectly cooked hard boiled eggs. This one I’ve started to do weekly so we have about 4-6 prepared for the week ahead for egg salads and salad toppings.

Soups, stews, chili, you name it. Did you see my recipe for 15 Bean & Sausage Soup yet? Talk about the perfect comfort food!!

The possibilities are really endless with the IP and I’ve seen some amazing recipes I’m dying to try. The one that I see recommended the most is from Nom Nom Paleo; Pressure Cooker Kalua Pig. We finally tried this recipe (modified because I was out of bacon) earlier this week and OOOOO….MMMM….GGGG…..let’s just say the family has already been asking when we’ll be making this one again. The Kalua Pig did take about 90 minutes to cook, but WAY quicker than in a slow cooker that would have to be going all day.

We picked up a rotisserie chicken the other night from the store and had leftovers. I stripped all the mean off the bone and stored it in the fridge. Then I put all the bones and the carcass in the IP with 2-3 cups of water and set it to steam for 90 minutes. I forgot about the entire thing until I went to bed so I left it sit on warm in the IP overnight. When I woke up in the morning I strained all of the bones and gunk, and stored the broth in the fridge. The broth smelled amazing!! (Nom Nom Paleo has a really nice recipe for bone broth if you want something with a little more flavor.) My son had his braces tightened that day and his teeth were killing him so I decided to make some chicken noodle soup with the leftovers. I briefly glanced at a few different recipes to find out the cooking time, but built my recipe using the ingredients I had on hand. I tossed in all of the chopped up chicken from the rotisserie leftovers, chopped onion, salt, pepper, chopped carrots, pasta (about 1-2 cups uncooked egg noodles) and the broth in the IP. I set the soup timer to 4 minutes and after about 20-25 minutes, with natural release, the soup was done! The soup was another fabulous comfort meal that took no time at all to prepare!!

I just found a pot roast in my freezer about 4pm tonight and we needed dinner! Thawed the pot roast for about an hour in a sink of water, it was still slightly frozen when I was ready to prep dinner. I turned the sautee feature on and browned the meat, then added some onions to brown those as well. Next I mixed a can of cream of mushroom soup with some beef broth (about 2-3 cups) and added to the IP. Finally I added some cubed red potatoes and carrots with some seasoning (salt and pepper). The timer is set on steam for 90 minutes and I’m hoping the meat falls apart when it’s all done. Only time will tell with this one, I’ll update you soon.

As for recipes, ideas, and how to convert your favorite recipes for the IP I refer to my friends Google and Pinterest a lot. I will also ask in our new Instant Pot Recipes & Tips group on Facebook. Now, there is a much larger group on Facebook, but this group was created with just a few friends so it’s a little smaller and more personal.

Up next on my list of recipes and dishes to try in my Instant Pot are steel cut oats, rice (and not the instant rice, real rice), and one pot potato salad!

There are a variety of different sizes and models on Amazon, but they are all essentially the same. I went with the 6 quart, 7-in-one multi-function pressure cooker because it was on sale one day. It’s plenty big enough for anything I can ever think of making for our family of 4. We probably would be completely fine with the 5 quart model also. I will probably never use all of the 7 functions that came with ours. I’m not sure if I’ll ever be brave enough to make my own yogurt, I mean I love my Stonyfield yogurt and all, but I can’t see me ever making my own! Only you will know which model is right for you. The only reason I went with this one was because the price was right!! If you’re a deal shopper, keep an eye on Amazon because they go on sale every few weeks.

Want to share your love of the Instant Pot with a friend? Pinning and Sharing is greatly appreciated!! Many thanks for your share love! 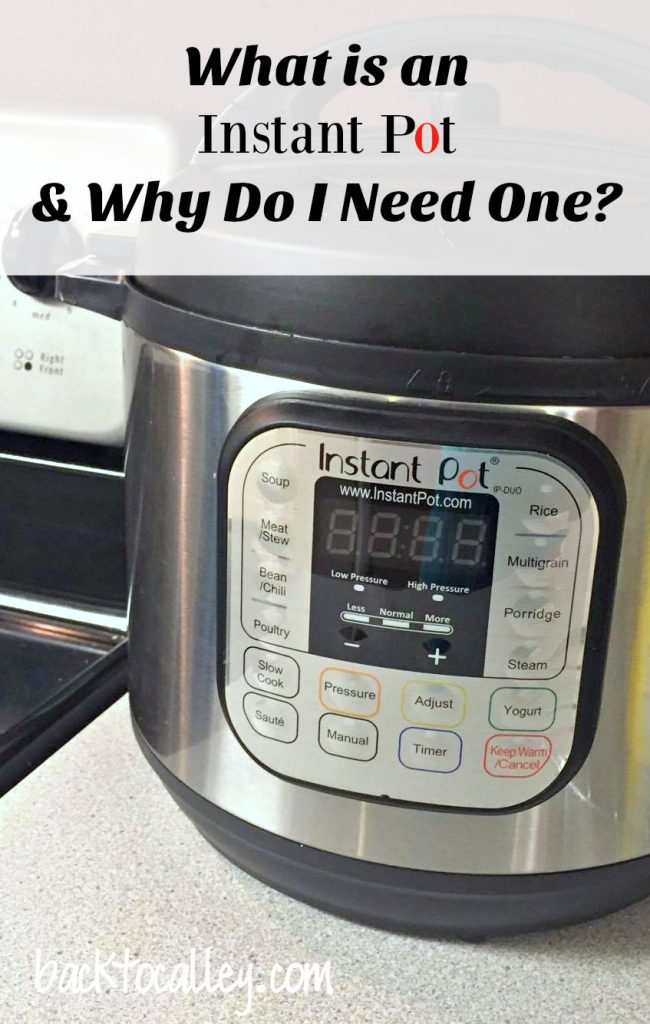 Disclosure: Affiliate links present in this post. All opinions and recommendations are my own. Love my Instant Pot!!