Did you know that Dolphin Tale 2 the movie is coming out September 12th?  I had the honor to be invited to a press junket this weekend in Tampa.  I’m still waiting for someone to wake me up and tell me it was all a dream.

We started the weekend with a family trip to the Clearwater Marine Aquarium for a behind the scenes tour of the facility.  During the tour, David Yates (CEO of the aquarium) sat down with us to tell us the story of Winter, Hope, and the Dolphin Tale movies.  We also got to talk with one of the senior dolphin trainers, Abby Stone.  Both of these individuals shared with us why Winter and Hope are inspirational to so many people and how the aquarium continues to work in the local community to protect the wildlife.

David started by sharing with us that the aquarium has actually been around since the early 70’s in it’s current location.  Did you know that the aquarium use to be a waste water treatment facility?  The primary mission of the aquarium has always been to rescue, rehabilitate, and release marine mammals who have been injured or stranded in the wild.  When an animal isn’t capable of surviving on their own, that’s when they become permanent residents of the Clearwater Marine Aquarium.  If you haven’t heard Winter’s story, it’s actually quite remarkable.  She was rescued near Cape Canaveral after being entangled in a crab trap which cut off the circulation to her tail flukes.  They truly didn’t think Winter would survive or ever learn to swim again.  After hearing about Winter and how she had lost her tail, Hanger Prosthetics worked to create the first of many prosthetic dolphin tales for Winter.  After a lot of prototypes and physical therapy sessions, Winter finally learned how to swim like a dolphin in the wild again.

Abby explained that Winter doesn’t need her prosthetic to swim, she modified and adapted to not having a tail and learned to swim more like a shark (side to side movements) instead of the up and down movements dolphins naturally take.  One of the most amazing facts of Winter’s story is that in order to get the prosthetic to stay on, Hanger had to create a gel stretchy sleeve (Winter’s Gel) to fit over her peduncle.  This sleeve has now been used in human prosthetics to make them more comfortable and to help eliminate pain associated with regular prosthetics.  Before Winter, this technology never existed. 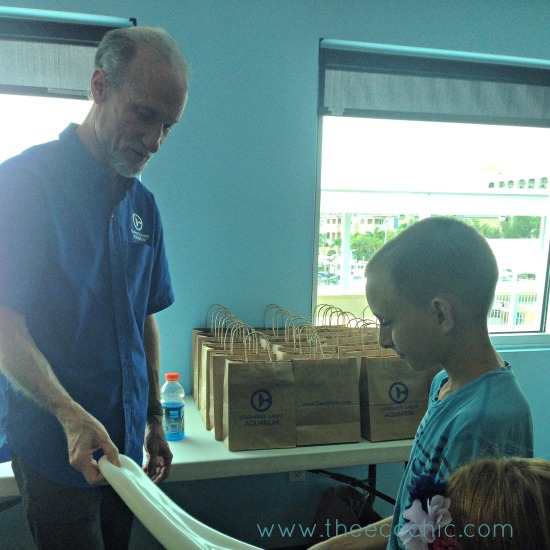 David Yates showing my son how Winters Gel works and how flexible it was.

If you’ve seen the first movie, you’ll know that the story is part real-life and part fiction with the story of the kids and the aquarium.  After filming was completed, the cast was celebrating at the wrap party when a new story unfolded right before their eyes.  Five years and one day after Winter was rescued, Hope was been found by a boater trying to nurse from her mother who had died.  The team from Hubbs Sea World Research Institute were the ones who were called to rescue Hope; it was later determined that the best place for her rehabilitation was at Clearwater Marine Aquarium.  Since Hope was a baby when she was found, she had never learned how to catch fish in the wild.  It was determined by the aquarium staff that Hope would never be able to survive in the wild.    The cast didn’t know any of this at the time, nor did they imagine that a few years later they’d be filming a sequel. 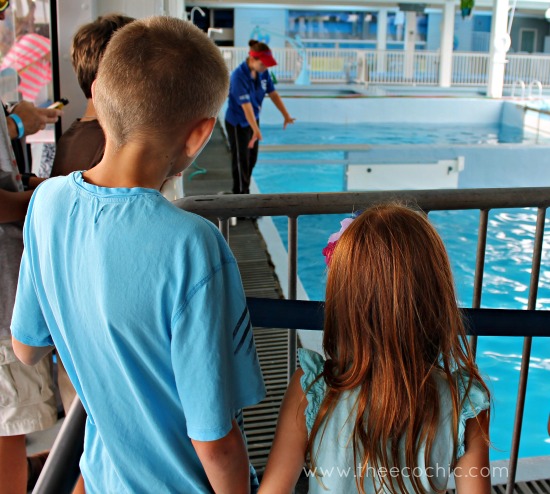 The kids meeting Winter and Hope!

Abby lead us downstairs to meet the famous dolphin duo; Winter and Hope.  She showed us a few of the ways the trainers at the aquarium interact with the dolphins every day.  Many of the skills they use in the dolphin performances are things they need to teach the dolphins in order to perform medical examinations and physical therapy on them as well.  It also helps to provide exercise and stimulate the dolphins from getting bored.  You can tell that both Winter and Hope have an amazing bond with one another and with their trainers. 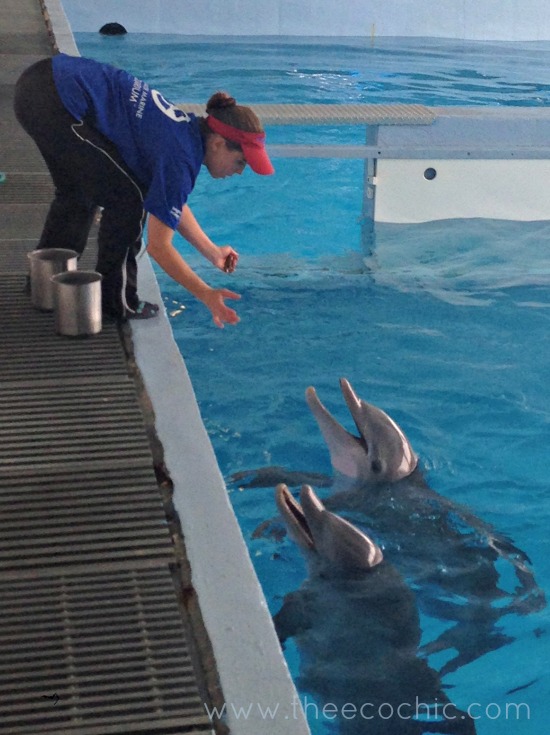 After our tour of the aquarium, we had the opportunity to screen the movie.  I won’t give away the actual story that goes along with the movie, but it’s just as inspirational as the first one.  Take a tissue with you if you’re prone to crying during movies; you’ll need it.  My kids laughed and giggled as they watched their dolphin friends on the big screen.  My daughter fell in love with Rufus and Mavis; a pelican and sea turtle in the movie. 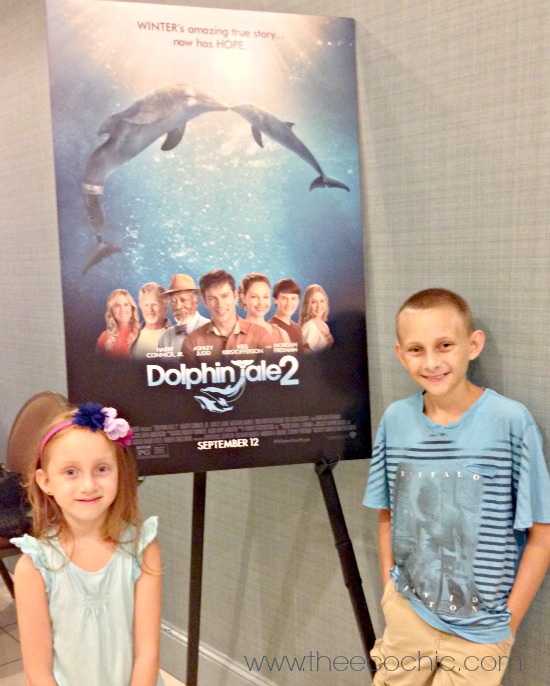 Once the movie was over, we had one more stop to make.  We were invited to interview some of the cast of Dolphin Tale 2.  In groups of about 10 people (mostly local bloggers) we got to sit down with Nathan Gamble (Sawyer), Cozi Zuehlsdorff (Hazel) and Harry Connick, Jr (Dr. Clay) and talk about the movie.  I was amazed at how sweet, mature, and down-to-earth the kids were when they entered the room.  They just sat down and started talking with us like we were old friends.  They thought it was “pretty cool” to be interviewed by a group of “Mommy Bloggers!!”  Harry joined us in the room a few moments later (and I think I may have fainted….I’m still not sure).

I think I lost my train of thought once Harry entered the room because his eyes are even bluer in person and his Louisiana accent made all the ladies smile.

The interviews continued for about 15-20 minutes (I lost all track of time) and I loved how personable they all were.  Harry has a hilarious sense of humor and had the entire room laughing with his answers.  What makes Dolphin Tale different than most movies is that Winter has such an impact on the lives of others; even the stars.  They all interacted with Winter and Hope during filming and had to train for weeks before just to be able to be in the tank with them.  I can tell you that I’m incredibly jealous of the bonds these kids have with the dolphins.  They are so passionate about them that both Cozi and Nathan are now spokespeople for the Clearwater Marine Aquarium. 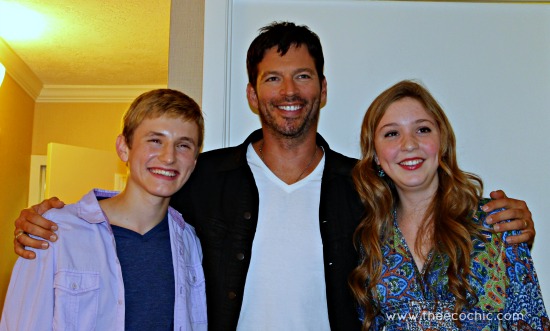 The cast of Dolphin Tale 2

One of our final questions we asked the trio was about a few of their local favorites.  We wanted to know where they liked to hang out when they were in Tampa.  They all mentioned that Clear Sky Beachside Cafe was a local favorite while filming.  I’ve actually never been to Clear Sky, clearly I’m missing out and will be stopping by soon.  They also mentioned one of my personal favorites, Frenchy’s!! If you ever decide to go, be sure to order a cup of She Crab soup (you can thank me later).  Finally, Harry especially had a fondness for Casa Tina’s in Dunedin.  Casa Tina’s is a great Mexican restaurant in the heart of downtown Dunedin with some pretty fun entertainment! 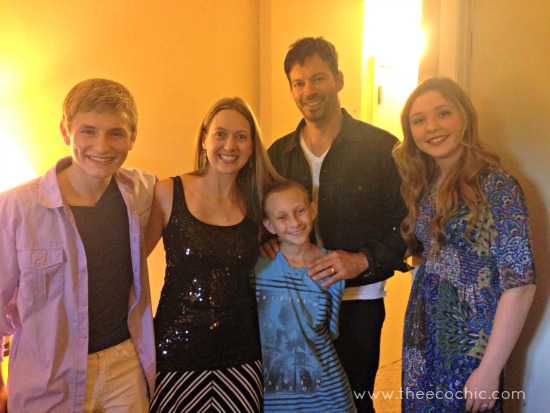 @TheEcochic and Son with the cast of Dolphin Tale 2

We ended the interviews with a quick opportunity to take some pictures with the cast and make some dreams come true!  I remember seeing my first Harry Connick, Jr concert in college and I’ve always had a fondness for his movies.  Having a chance to talk with him and take a few pictures was really an amazing end to a wonderful weekend.  Did I mention that both my kids were with me??  They haven’t stopped talking about the dolphins, the movie, and their new friends all week!

Dolphin Tale 2 comes out in theaters September 12th.  Make a point to go see it, you won’t regret it!

If you’re in the Tampa area, stop by and visit Winter, Hope, and the rest of the Clearwater Marine Aquarium residents and staff.  They are open for tours 7 days a week, offer summer camps, field trips, and other educational activities for adults and children.

Disclosure: I am part of the #DT2TampaCrew; a group of local Dolphin Tale 2 bloggers.  We received tickets to the screening and to Clearwater Aquarium for this post.  We also received a few small gifts including an adorable Winter stuffed animal; who is missing her tale also.  I would have raved about this movie with or without the goodies.