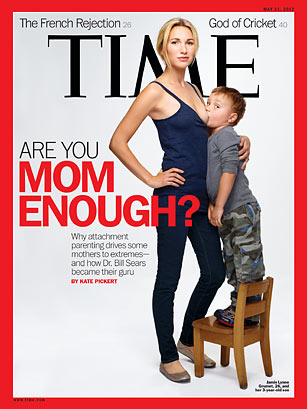 What do you think of when you hear those words or phrases?  Do you hear positive words or negative phrases?  It all depends on how you parent I suppose.  I will tell you both sides of my story.

Child #1 – Parenting Age – 29:  When my son was born I still considered myself a fairly young parent even though I know I was older than most of you when you had your first child.  I lived in a rural town and didn’t have a lot of friends with children.  I knew from the beginning of my pregnancy that I wanted to ‘try’ to breastfeed my son for at least the first few months.  I was working full time and had no friends or family who I knew that breastfed.  My OBGYNs office didn’t provide me with any guidance on whether to breastfeed or offer my child formula but they did give me free samples of formula.  In the hospital I struggled with breastfeeding but the lactation specialist and nurses were very supportive and never once suggested that I offer him formula.  I left the hospital with a pump and an appointment with the lactation specialist to follow-up.  I came back a few days later and she tried to help but I still left and continued to pump.  I resorted to educating myself and with the help of a nursing shield was able to teach my child how to latch within a few weeks.  He was healthy and continued to gain weight so the medical professionals stopped worrying about it.  I had support of my family but was questioned often about how long I was going to continue to breastfeed and how did I know that he was getting enough.  As a first time mom I had to go with my instincts – I knew he was growing and healthy and that I was doing what was best for him so I didn’t worry!  I didn’t have any other breastfeeding problems until he was about 10 months when I had my first cracked nipple and my nurse suggested that I stop breastfeeding immediately and have a mammogram.  Thankfully I didn’t listen to him, continued to breastfeed, and contacted a La Leche League (LLL) in my area for advice.  The crack healed and I continued to breastfeed until he turned one year old.  Weaning was hard and painful but at the time it was the right thing for our family.

After that experience I was the go-to-girl for my friends and family when they had their babies.  I encouraged friends and family to give it a try and my best piece of advice was for them to listen to their instincts.  I never once considered myself an attachment parent, I never wore my son, I didn’t cosleep, and I didn’t know anything about cloth diapers (aside from the fact that my mom used prefolds on me).  Breastfeeding to me was the way I chose to feed my son – it was my parenting choice.  I do remember thinking  at the time that extended breastfeeding beyond the age of 1 was weird.

Child #2 – Parenting Age – 35:  Many of you have been following along since my daughter was born and know my breastfeeding story.  I breastfed her until her 2nd birthday when we were officially done weaning.  I chose to wean because it was an agreement that my husband and I had made about when to stop.  I never in a million years would have thought I would have breastfed my baby until she was 2.  I wore her in a sling and in an Ergo.  We didn’t practice cosleeping but our babies still sleep with us on the weekends or when they are sick.  I’m sure that these parenting choices were made due to some of my influences in the cloth diapering community.  Many cloth diapering parents also breastfeed (some for 2 yrs, 3 yrs, and some for longer), wear their babies, and cosleep.

What I’ve learned with time is that my perspective has changed.  Breastfeeding a child beyond one year old is no longer strange, weird, or even gross.  It’s normal and I think that with time it will be more accepted.  At this time though the comments about this cover photo are a perfect example of why parents fail at breastfeeding their children.

Mother’s continue to feel like they constantly have to hide behind a nursing apron, hat, or other crazy invention that keeps your baby and your boob out of the view of others.  For some reason society thinks that walking around in a barely there bikini is acceptable but breastfeeding a baby (or toddler) is something that we need to hide.  Here is a beautiful video that I’m sharing from Annie (PhD in Parenting) compiled last year about breastfeeding and covering up.

Now about the magazine cover!  The cover photo shows a 26 year old mom, Jamie Lynne Grumet, breastfeeding her 3 year old son.  The title on the cover says “Are You MOM ENOUGH? Why attachment parenting drives some mother’s to extremes…”

A 26 year old mom nursing her 3 year old toddler – BEAUTIFUL!  I love that she (and the magazine) have decided to show the photo on their cover.  Breastfeeding is a beautiful thing and there is nothing wrong with the photo.  Breastfeeding in public is an on-going debate between parents and society and what is socially acceptable.  Breastfeeding a toddler is more common than most of us think but you’ll probably disagree with me because mothers feel like they must hide from society.  Maybe it’s not as accepted here in the U.S. but in other countries the average age is 3 or 4 years old. (Please don’t give me the excuse that developing countries need to breastfeed for longer because they are poor – most of Europe is more accepting and last time I checked there are wealthy people there too!)

Another thing that I see when I look at the photo is a toddler standing – toddlers are very active and when Lil’ B was nursing she would stand, sit, twirl, and do acrobats while she was nursing.  Seeing this boy standing up is nothing uncommon to me.

“…somehow I’m even doubting those boobs hold milk, they certainly don’t look like they’ve been nursed on for 3 years straight.”

As a rather small breasted woman myself I can tell you that by the time I weaned my breasts were quite small and didn’t look like they could possible have any milk in them any longer.  We were only nursing 1-2 times a day at that point so I’m sure there wasn’t much milk but there was enough.

I do see the photo trying to provide shock-and-awe!  TIME wants this to be controversial so that people will read their magazine.  I see the title as trying to grab your attention and cause you to be passionate (either positive or negative) about attachment parenting and extended breastfeeding.  It wants to start a conversation!  It’s done just that, hasn’t it?

Is the title too harsh?  Is it drawing yet another line between mothers?  Is it trying to get us to say, “I’m right, and you’re wrong?”  Perhaps that’s all in the way you read it.  I personally think that it works at the shock-and-awe and it works to get you interested enough to want to read the article.  If you actually take the time to read the article and supporting articles on their website you’ll see that it’s not trying to slam a parent for their choices.  It’s not trying to draw that line between mothers.  It’s trying to educate parents and society that the parenting choices (breastfeeding, extended breastfeeding, babywearing, cosleeping, cloth diapering, and attachment parenting) are not only for attachment parents – but for any parent who chooses it.  They could have easily have shown an ugly, fat, women who portrays the characteristics of what society calls a hippie breastfeeding a toddler but I doubt that it would have gotten this much attention.  The women they show in the rest of the magazine are all mainstream, typical American women – moms – who choose to breastfeed.

What is so wrong about nurturing your child?  Why do we feel the need to stick our noses where they don’t belong?  The best thing we can do in society is learn to be more accepting.  I want to challenge everyone to smile and keep on walking next time they see a woman breastfeeding their child – regardless of the age.  Don’t make them feel uncomfortable, don’t look embarrassed, and please don’t ask them to cover up or go someplace else.  If you are a mother  who wasn’t successful with breastfeeding, couldn’t breastfeed or just didn’t think it was for you – I want to encourage you to look past the shock-and-awe of the photo and read the article.  You may just be surprised to find out that we all have something in common – we love our babies and want what’s best for them.

I want to wish you all an early Happy Mother’s Day and encourage you to leave your comments.  Just remember to be polite or respectful.