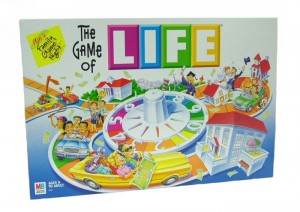 Want to know something funny?  I’ve never played the board game LIFE. We were a Monopoly family growing up and my brother and I never got LIFE.  This week while at camp my son played LIFE and pestered me all week that he needed this game.  My frugal mind said that we’d wait until right before Christmas when you can find it for $5 in the stores but he REALLY wanted this game.  So we shelled out ‘almost’ full retail price this weekend for him – dang that hurt!  Anyways to get to the point on my post I played LIFE for the first time last night.

The Game of LIFE as played by an 8 year old

After about 20 minutes reading over the rules (yes, I’m that dork – didn’t want to miss anything) my son and I started playing LIFE.  At 8 years old he’s lived enough LIFE himself that I thought it would be fun to see what choices he made for his own LIFE.  I won the opening spin and chose to take the same path that I took in my own LIFE and went to college.  He didn’t even hesitate and chose the college path too.

Now in real life college took me several years longer to complete because I had gotten married (and yes, later divorced), worked full time, and only had enough time left for a few classes each semester.  It was one of the bigger universities in the area but it was considered at the time a transit school – no dorms, no sororities, etc.  Needless to say my college experience was not the traditional party, get laid, get drunk experience that a lot of colleges offer along with their education.

I found it interesting that he didn’t even hesitate to take out a loan for $50,000 to start his college career.  In the game college didn’t last long at all and neither of us had any set backs and we both received scholarships.  That didn’t really feel like my college experience if real LIFE but I’m curious as to the next step and what my son will choose.

Career: Unlike real LIFE at the end of college in the game we both got to pick between the 2 career choices that were dealt us.  I don’t remember these choices being so easy and I doubt that it would really be this easy to be a Doctor – which is the career path that I chose.  It was either that or a Computer Programmer which had a maximum salary limit.  Of course as an adult I choose the ‘No Maximum’ option.  My son was then faced with his choice and I don’t think he knew what a maximum was because he had a choice between a Lawyer and a Vet and chose the Vet.  The reason he said he chose the Vet was because it HAD a maximum.  It actually upset him when I explained the difference to him – but that’s LIFE right.

So here we are, my son and I, after a very short college experience, both with great jobs – a doctor and a vet.  Now to enter the workforce and see what else LIFE has in store for us.  Next on the list was getting engaged and getting married.  Again, this was a decision that was much easier in the game because there are no real emotions going on here – no last minute ex’s coming into the picture to make you reconsider and turn a 21 year old girl into a complete and total teary mess when your fiance decides he doesn’t want to get married anymore and leave the state for a few days.  No fiance running back a few days later with a change of heart and a wedding that should never have continued going on “as planned” which well as I mentioned later ended in divorce (big shocker I know)! My son quickly got married, accepted his wedding gifts from the other players (ok – just from me since it was just the 2 of us playing tonight), and continuing along the game of LIFE.  Did I mention that neither of us had to pay a penny to get married in the game? I remember quite clearly the amount of money my parents ended up spending for me to get married back then and it was a big deal and there were lots more decisions.

Back in the game the next stage of course was having children and both my son and I ended up with 2 children each in the game.  He was actually really excited about getting as many children as he could.  He really wanted a car full of kids and a few twins. I guess it’s a good thing that at 8 years old he sees himself in the future with kids and looks at that as a reward.  It’s reassuring that when he becomes an adult that maybe he’ll still have that same feeling and not be one of those guys afraid to commit to getting marriage and having a family – but he is only 8 and he’s got a lot of LIFE lessons still to learn.

Again in the game it was funny that having kids was super easy! You just plop out a little pink or blue peg and take them home. Not at all like the 9 months most women spend puking their guts out, getting fat and wondering if they’ll need an epidural!  Oh and did I mention that you get $5,000 for having a baby in the game – did I miss that part in real LIFE?

Next up was getting your first starter home. Now is when it started to get really fun – in the game we’d both already made a butt load of money as a doctor and a vet and we could pick any house we wanted.  Being completely new to this game I chose to go conservative and pick a middle of the road Cape style house for about $140,000.  My son didn’t want the biggest house either and chose to go with a lesser valued house around $80,000.  There was no worry and stress about which house you were going to pick, no stress over if now was the right time to buy, if you should live in an apartment a little longer, none of the real LIFE worries ever came into play in the game.  By the time I bought my first real LIFE house I had already been divorced but I wasn’t finished with that very long college path yet so there was no career yet either.  Just a fantastic man that I knew I was going to later marry and myself in the boonies of Georgia where we knew we could afford our tiny little pad.

Back in the game there were more decisions to be made – my son lost his job and had to pick another career. In his second career he got to be an athlete so that was pretty cool.  Of course I’m sure there aren’t too many vets turned athletes after getting married and having 2 kids – but again this is only a game!  We both had to decide whether we went back to college or continue on the game of LIFE – we both went back to college and we both decided to keep our cool jobs with no maximum salaries.  I loved how every few pay days that you would get a raise without asking!

As we continued to play my son kept talking about his family – not his money or his job. As a mom that makes me proud and I feel confident that even with all our parenting errors that he’s going to turn out ok in real LIFE.  We both kept playing and moving along our given paths and it came to upgrading our homes – this one made me giggle! I of course lived out my dream and upgraded to a slightly larger home.  I was now living in a nice $400,000 middle class dream home – I had the money to get a bigger home, even a mansion, but this was really the house I wanted in real LIFE.  My son on the other hand traded in his cute little starter home for a Double Wide Trailer!  Yes, my son the vet turned athlete decided to buy an $80,000 double wide! He also owned a second house in the cabin and a sailboat – just like an athlete right?  Oh and did I mention that he also survived a tornado?  No devastation here – just pay $120,000 and keep on moving!

The end of the game pretty quickly – I was afraid of that Monopoly 2-3 hour game time so being done in about an hour was great!  In the end we forgot about our long term investments – just like in real LIFE – but we ended up with a ton of money, 2 kids, and no divorces.  We both retired in the mansion and lived happily ever after!

I wonder how much fun my real LIFE would be if it were a board game?  What about you?  Is there a lesson we should be teaching our children about real LIFE?  Are we doing a good job at it?  Or will they make similar mistakes in their own lives and have to learn to live with their decisions.  I can only hope that his real LIFE is much easier and much more like the board game but I know that’s not really going to happen.

Disclosure:  No disclosure is needed it – I’m just writing about LIFE experiences with an 8 year old.  And I should add as a footnote that my family may not be perfect and life might not be easy but it’s a pretty good life.  And it wouldn’t be so perfect without my husband and father to my kids who is at work on Father’s Day.  Baby – I love you and I’m happy to be on the road of LIFE with you! We’re very lucky to have such a great ‘Dad’ in our family.  Thanks for all that you do.